When Senate President Don Harmon called Senators back to the Capitol for a one-day session on June 15, Senate Republicans were told to expect a vote on an omnibus energy bill that would eliminate coal-powered energy by 2035 and natural gas by 2045.

In addition to closing the Prairie State energy Campus and Springfield’s City Water, Light and Power before the ends of their useful lives, the legislation included another massive bailout for scandal-ridden Excelon/ComEd, which has repeatedly threatened to close nuclear energy plants if the State did not provide significant financial support.

After waiting all day for a negotiated bill to be filed and heard, the Senate abruptly adjourned shortly before 6:00 p.m.

It was learned shortly after adjournment that in addition to remaining sticking points involving closure timelines for Prairie State and Springfield’s City Water, Light and Power, the developer of a $1.3 billion natural gas plant currently under construction in Grundy County threatened to pull the plug on his project if the bill was passed as written.

In a press conference following adjournment, President Harmon admitted he was having trouble lining up votes within his caucus for legislation that pitted what Harmon referred to as “two critical constituencies” against each other, organized labor and environmental activists. It is no coincidence that these two groups are also primary donors to Senate Democrats’ campaigns. When legislators prioritize their donors over their district constituents, Illinoisans lose.

I’m told we may return to Springfield later in the summer to vote on an energy bill. I remain hopeful that the bill that ultimately comes before the Senate is one that I can support. I am supportive of a cleaner energy future for Illinois, but I am looking for a bill that balances what is best for the environment with what is best for ratepayers and workers. I have met numerous times with environmental groups in and around the 32nd District, and I respect their points of view and they understand my concerns. Those conversations will be ongoing over the summer.

In the overnight hours of May 31-June 1, majority party Democrats rammed through a nearly 4,000-page budget that guides spending for the fiscal year that begins July 1, 2021.

No committee hearing was held, and legislators were not provided with an adequate amount of time to read and understand the document.

As approved and sent to the Governor, the Fiscal Year 2022 budget had several drafting errors including the absence of many key effective dates.

Without the effective dates, 85% of General Funds money could not be spent by State agencies until June of 2022, 11 months into the fiscal year. It was a sloppy mistake, and one that could have been avoided if there was transparency within the budget process and if ample time had been provided for a thorough review of the lengthy document.

The budget fix required an amendatory veto by the Governor. While fixing the multiple drafting errors, the Governor could have used his veto pen to strike out the line item for legislator pay raises. Senate Republicans urged the Governor to do the right thing and remove legislative pay raises, but their request was ignored and the Governor kept the raises in the budget. Governor Pritzker had an opportunity to right a wrong, but instead chose to go along with giving Senators and State Representatives an undeserved raise for FY 22.

This week on Thursday and Friday I kicked off my summer events series with a Coffee & Conversation in Marengo on Thursday, and a Conversations Untapped Friday evening in Harvard

We had great turnouts at both, as constituents were eager to have face-to-face conversations again after over a year of restrictions.

I will be hosting several more of these events throughout the summer in communities in the 32nd District, so please visit my website (SenatorWilcox.com) often for updates.

The Senate and House both passed their own versions of Firearm Owners Identification (FOID) card legislation before adjournment on May 31-June 1. Whereas the House’s version included a mandatory finger printing for anyone who wants to obtain a permit to own a gun, the Senate FOID bill made finger printing optional, but also included provisions to streamline approvals with hopes of addressing the huge backlog of FOID applications and renewals that currently exists with the State Police’s Division of Firearms. Neither bill was approved by the other chamber.

On Wednesday, the House of Representatives passed the Senate’s version of the bill (House Bill 562). As passed by both chambers, the legislation includes the following:

I voted against the bill. 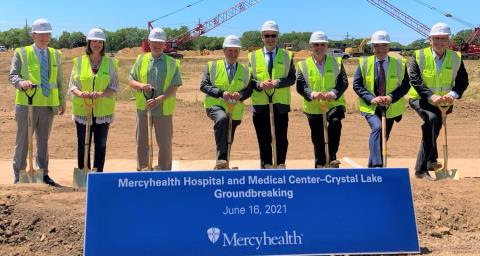 On Wednesday, it was my pleasure to attend and speak at the official groundbreaking ceremony for Mercyhealth’s new Crystal Lake hospital.

When this state-of-the-art facility is completed in 2023, Crystal Lake will finally have its own 24/7 emergency room.

This will truly be a marvelous addition to Crystal Lake and the surrounding areas.