I received my second call on behalf of the Lou Bianchi for State’s Attorney campaign yesterday.

The first was from Carolyn Cox, the woman whose husband bludgeoned her and left her to die in a garage filling with exhaust fumes.

Yesterday’s was from Lou himself.

It’s always nice to hear from the candidate himself.

But the call from Cox was more effective, I think.

“We’ve gone after (crime), bringing in experienced prosecutors…stepped up support for victims…”

As you can see, I only got snatches of his message. 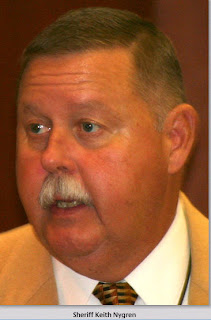 I guess the $15,000 that Dan Regna reported receiving in the middle of last week must have gone to pay for the letter from Sheriff Keith Nygren.

I wonder if that means that Nygren’s polling indicated that he had coat tails or whether he was just in so deeply he figured he had nothing to lose.

He’ll be right, if his candidate wins.

If not, well…at minimum he will lose face.

And, remember, power is a matter of perception.

If others perceive you have power, then you have it.

= = = = =
The pictures of McHenry County State’s Attorney Lou Bianchi and challenger Dan Regna were taken at the Algonquin Township Republican Central Committee’s candidates’ night on January 28th. The photo of Sheriff Keith Nygren was taken while standing in line to gain entrance to the inauguration ceremonies of the 22nd Judicial District in early December, 2006.i