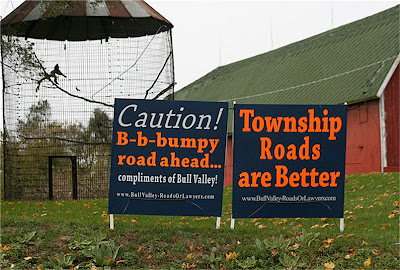 One of the tiniest ballot issues in Illinois concerns whether the Village of Bull Valley in McHenry County shall forcibly annex two farms totaling 200 acres.

It used to be that you needed to surround an unincorporated property to be able to force it into your municipality. Somehow that law got amended and now all you need is six contiguous properties to grab a much larger parcel.

To distribute the proceeds of a will, the Ann Kaiser Estate is trying to get 40 clustered homes on 1-acre lots surrounded by 80 acres of open space, complete with open to the public horse and hiking trails, zoned on her 120-acre family farm. The village allowed McAndrews Glen to put half-acre lots on 90 acres just down the road and around the corner from the farm. And Inland Real Estate has just been given straight 3-acre zoning.

Although surrounded by straight 3-acre zoning on the west and south (in the village itself) and across an agreed upon boundary—Ridge Road—with McHenry, where there is 1-acre zoning, the village officials are insisting on 5-acre zoning.

The village refuses to negotiate. It won’t even allow the petition to be re-considered by the village planning or zoning folks.

It just sends its lawyers to court to defend the indefensible.

The only recourse to the continuing lawsuit, which the Estate lawyer says will be taken to the Supreme Court, was to pass a petition to allow the voters to decide on the annexation in a referendum. 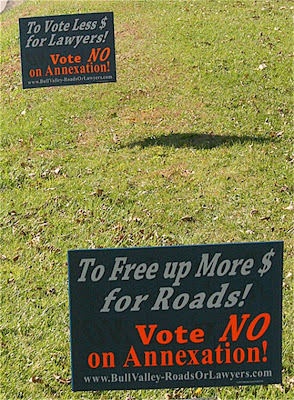 I passed the petition, getting about 50% more signatures than necessary.

Village officials refused to accept the petition. Attorney Bob Wagner, a former Crystal Lake mayor, had to go to court to force the village’s law firm to accept the paperwork.

“Bull Valley is not Mayberry,”

The issue is a tough sell, with the village mothers and fathers and their support group selling “Open Space.”

Our literature featured a recommendation from the Village Engineer:

“The Engineer cannot recommend bringing into the Village an additional 1.6 miles of roadway without a source of revenue to maintain them.”

And you know the old adage that you can tell where a person spends his money what his priorities are? 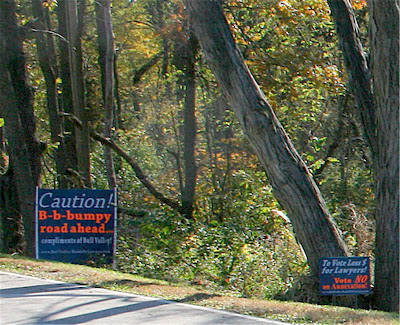 I researched monthly expenditure reports for a number of years and discovered that Bull Valley’s road maintenance program consisted of pot hole patching since 2001. Usually under $1,000 a year. 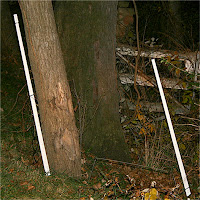 To Vote Less $
for Lawyers!

Vote No
on Annexation!
www.BullValley-RoadsorLawyers

This is the first time I have utilized the internet in a campaign.

Our web site, Bull Valley – Roads or Lawyers, certainly was worth the effort. 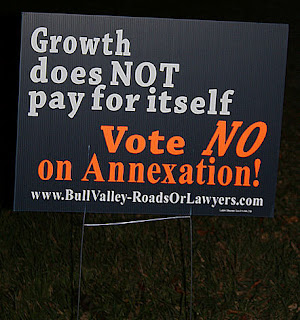 Today, the villagers are voting, driving past signs saying,

Growth
does NOT
pay for itself
Vote NO
on annexation
www.BullValley-RoadsorLawyers

Do I think my side will prevail?

Reflecting on how much fun I have had on this referendum campaign, I’m wondering if I should change my mind on Con-con. After all, it might end proposing initiative and recall.
.
.
.
Nah.