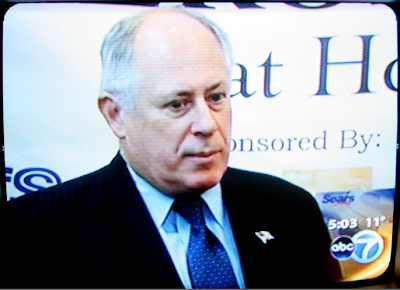 In their 1993 out of print biography of former Governor “Dan Walker, the Glory and the Tragedy,” Taylor Pensoneau and Bob Ellis, not only write of the role of Pat Quinn in the 1972 campaign and the early years of the Walker administration, they trace his actions through the publication date of the book.

On page 357, the book tells of the decade and a half after Quinn left the Walker administration until 1992, when he was elected State Treasurer.

He “became an incredible thorn in the side of the establishment” using a group called the Coalition of Political Honesty.

He “spearheaded a drive to create the Citizens Utility Board, “to the horror of utilities.”

And, he led the petiiton effort to amend the state constitution to cut back the Illinois House from 176 to 108 members.

“predictably…had to circumvent the regulars in his own Democratic Party, which made him a chip off the old block in respect to the person who had brought Quinn onto the state political scene.”

= = = = =
A pensive Lt. Governor Pat Quinn makes a scheduled appearance about a week after his running mate, Governor Rod Blagojevich, was arrested by the FBI. Impeachment was in the air and those regulars and their successors who didn’t want to see him elected State Treasurer were preparing to install him as governor.