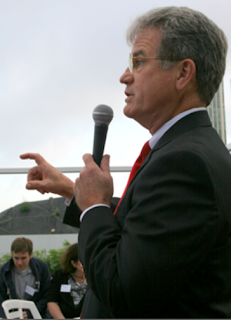 In the first, U.S. Senator and Dr. Tom Coburn’s take on the health care debate. Coburn was on the Senate committee considering the proposal.

I passed David, Abbly and Grafton Township (Huntley, Lake in the Hills, Lakewood) Township Supervisor Linda Moore. Moore ran on a platform that the Republican township board had made a big mistake putting the taxpayers in debt by over $5 million to build a new township hall without a referendum. She won the GOP township primary election by 30 votes. Since then, with a taxpayer suit pushing them the GOP-controlled township board has agreed with Moore to cancel the loan. 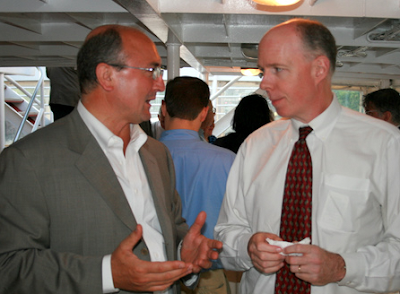 Downstairs I found Cook County Commissioner Tony Peraica talking with Chris Robling. Peraica told me earlier that all he was running for this year was his county board seat.

Next, I bumped into Bob Kjellander, who was talking to State Rep. Bob Biggins (on the left). Will Jamison, who helped out at the Republican National Convention in Minnesota and has recently moved to Chicago, is seen in the middle. Obviously, something really tickled the former GOP National Committeeman’s funny bone. 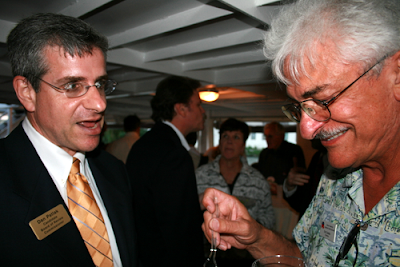 I don’t follow Cook County politics, so I was surprised to find a second candidate for the suburban seat on the Cook County Board of (Tax) Review. He is Dan Patlak. You see him here chatting with Vernon Township Republican Party Chairman Don Castella. Patlak is Palatine Township Assessor. 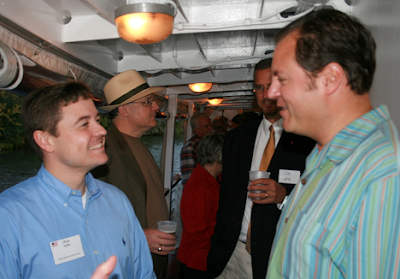 I ran into a second candidate who wants to replace Bob Biggins in the General Assembly. His name is Chris Nybo. He is currently an alderman in Elmhurst. Here is his web site. I don’t know to whom he is talking, but if someone will tell me in a comment, I’ll add it.