The story of how Jeanne Hurley was tricked by legislators who wanted to prevent reporters from getting another tape recording such as was given Chicago reporter Jack Mabley about the Currency Exchange bribes to legislators.

Ever heard of Roland Libonati?

He was a state senator while Jeanne Hurley, later Mrs. Paul Simon, was state representative from Evanston.  Libonati later became a member of Congress representing the West Side of Chicago.

I met him in the Springfield train station after session adjourned for the week one day in the 1970’s. He had been visiting old friends, sitting next to Larry DiPrima in the back row where the”Royal Order of the Mushrooms” sat.

After a while he warmed up to me, concluding that this Republican wasn’t a threat and started tell old war stories.

He told of how some non-reformers convinced Jeanne Hurley  to introduce legislation to limit secret tape recording. Here are the two I suppose he was referring to two 1957 bills, House Bills 1210 and 1211 (click to enlarge the Digest listings and look at the list of reformers sponsoring the bill): 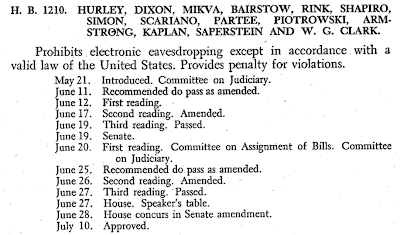 The idea came up after Chicago American reporter Jack Mabley had written a series of stories on corruption. Someone taped  legislators talking in their hotel rooms.

Needless to say, Libonati, reportedly a member of the West Side Blocbeholding to the Crime Syndicate,  did not convey that tale.

That was before the George Ryan, Tony Rezko and Rod Blagojevich trials, of course.

And, while we’re talking about eavesdropping, let’s not forget the legislators who voted against loosening the law this year: