What would you do if your local school district sent you this newsletter shortly before a bond referendum was to be voted upon? (You will have to click on the images to be able to read them.) 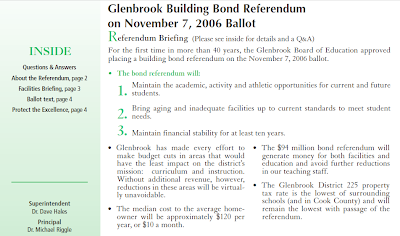 In the Fall of 2006, School District 225 in Northfield Township (Northbrook and Glenview) placed a $94 million bond referendum on the ballot.

Many of you may have seen something like what I have reproduced above and below.

Fair and balanced it is not.

Newsletters such as these are clearly sent out to encourage people to vote for higher taxes.

There was more than one Glenbard Township High School District newsletter pushing the referendum.

“Do you think that 72,000 mailers within 17 days
before the election made a difference?

After the 2007 the election, Citizens Organized to Save the Tax-cap filed a charge with the Illinois State Board of Elections stating that, since the District had spent more than the minimum $3,000, the school district was required to file a statement of organization as a Local Political Committee, plus file reports of contributions and expenditures.

On a 6-2 vote, the Board of Elections dismissed COST’s complaint.

Here’s part of what an observer wrote about the Board of Elections meeting:

“None of the Board stated that the District’s actions were appropriate.

“Board member William McGuffage commented that these mailers were one-sided and not meant to get out the vote, but regulation of this activity is clearly too cumbersome. He noted that although the District sent out newsletters on a regular basis, these two were ‘special newsletters’ regarding the referendum. He questioned the taxes spent vs. benefits and suggested this activity opens school districts up to taxpayer lawsuits. He thought litigation was the proper method of remedy.

“Vice Chairman Bryan Schneider commented that any balance in the literature was buried in the lower reaches of the missive.

“[District] 225’s attorney commented that pointing out that taxes were going to go up was sufficient. He also said ‘forums are the opposition’s chance for balance.’ (Anyone who went to the last forums knows they were a pitch, orchestrated by the District to sell the referendum.) Schneider saw through this and suggested that if the District were truly interested in balance, they would publish filings which gave out the opinions of both sides.”

On May 22, 2009, the Appellate Court of Illinois, First District, issued its opinion.

The court held that government entities are not automatically exempted from the filing and disclosure requirements of the Illinois Campaign Disclosure Act, and that the dismissal by the ISBE of COST’s complaint was improper.

“The [State Board of Elections Hearing Officer’s] report stated that section 9–25.1 of the Election Code (10 ILCS 5/9–25.1 (West 2006)) permitted the use of public funds to inform taxpayers of the upcoming referendum.

“The report explained that although sections 9–1.7 and 9–3 of the Election Code have a $3,000 reporting threshold for organization and filing as a local political committee, public funds should not be calculated in determining whether the threshold is met.

Commenting on the Election Interference Act, which the school district said it did not violate, the Appellate Court said,

“There is no conflict or ambiguity among the statutes in question.

“Section 9–25.1 simply serves to prohibit the use of public funds to explicitly support or oppose any specific candidate or proposition while still allowing such funds to be used to disseminate factual information to the public regarding propositions. Nothing in the statute suggests that it serves to absolutely exempt government entities from the disclosure requirements contained in the remainder of the Election Code.

“We must read the statute in the manner in which it was written and must not read into it exceptions, limitations or conditions that are not already there.

“Nothing in the statute suggests that it serves to absolutely exempt government entities from the disclosure requirements contained in the remainder of the Election Code.”

“Petitioner argues that the newsletters the District circulated constitute an electioneering communication and, therefore, they were subject to the applicable portions of section 9–1.7.

“Respondents argue that the newsletters did not constitute electioneering communications because they did not advocate the referendum in the mailings.

So the court lays out what an “electioneering communication” is:”

But after doing so, the court says it doesn’t want to get involved:

“…we decline to reevaluate the determinations as to whether the documents advocated the passing of the referendum since we do not find it to be necessary.”

And the next part will send chills up and down the spines of school officials throughout Illinois:

“The communications here clearly refer to the referendum in title and content, and thoroughly discuss it in detail.

“Respondents’ arguments that the documents ‘speak for themselves’ in that they only encourage individuals to vote is unpersuasive. The newsletters clearly address and focus on the referendum and thus, under the plain language of section 9–1.14, are electioneering communications.” [Emphasis added.]

Then, giving ammunition to future bond issue opponents everywhere in Illinois, Justice John B. Tully, Justices Joseph Gordon and Michael P. Toomin, concurring, say, “Respondents’ argument that the newsletters were nothing more than communications designed to encourage individuals to vote is unpersuasive.

“The second page of the second newsletter did state 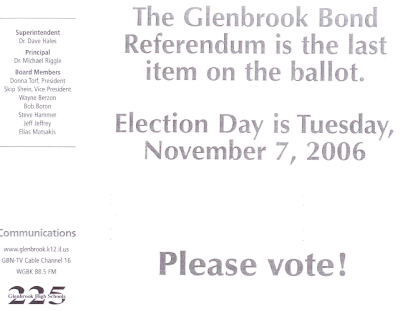 but in equally large letters above it also stated that

‘The Glenbrook Bond
Referendum is the last
item on the ballot.’

“This was the only place, out of a total eight pages of newsletters, that actual voting was mentioned.

“Furthermore, the first page of that newsletter was entirely dedicated to discussing the upcoming referendum. 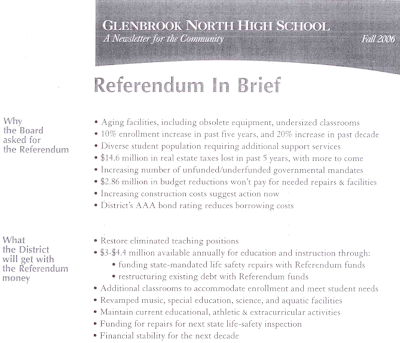 simply no evidence thatthese newsletters were exempted communications ‘made as part of a non-partisan activity designed to encourage individuals to vote or to register to vote,’

and especially so because the newsletters were products of a campaign directly related to the referendum and not the voters themselves.

“…we find that it was clearly erroneous to find that the newsletters did not constitute an electioneering communication under the plain language of section 9–1.14.

“For the foregoing reasons, we find that it was improper to find that petitioner’s complaint was not filed on justifiable grounds, and the decision of the State Board of Elections of the State of Illinois is reversed and this cause is remanded for further proceedings.”

Here’s the rest of the first newsletter: 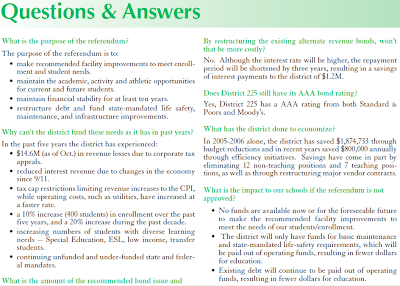 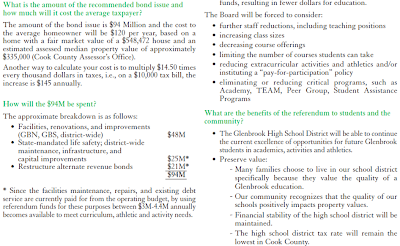 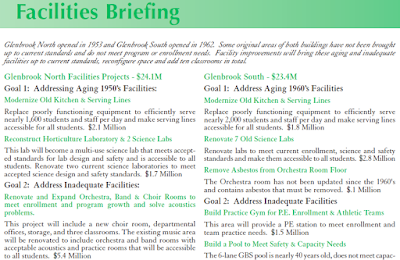 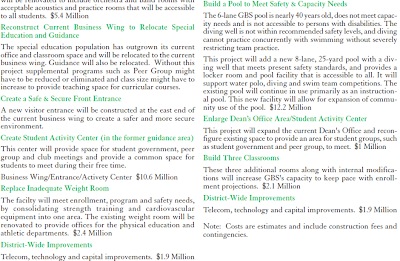 Attorneys Richard Becker and Lawrence T. Miller won the case for the taxpayers.

The school board members were

District 300 Says Newsletter Pitch for Referendum Not an Ad

Will the Election Interference Act Ever Kick In for Blagojevich?