Jim Roden, owner of the Framery in Ridgefield has sent the following letter to Metra Chairwoman  Carole Dovis.

A copy was sent to the railroad commuter agency’s Inspector General Hillard Heintze. When the grass was green signs saying "No Metra" popped up in and around Ridgefield. Click to enlarge.

I am writing this letter in an effort to inform you of a very large concern with the proposed Metra station in Ridgefield.

There is a huge groundswell of distrust for the reasoning process so far displayed which purports the need of this new station.  I shall outline several issues.

First, there is the issue of real need.  How many train stations are needed in the area surrounding Crystal Lake? Distribution of ridership presented by Metra to Crystal Lake planning officials. Click to enlarge any image.

Are you saying that the future population will require 5 stations in this short span?

There are already two stations within Crystal Lake.

There is a station in Woodstock.  There has been land donated to Metra for a third station, the Merryman property, along Lily Pond Road off IL highway Rt 14.

This location is within 2 miles of Ridgefield. Now, another station is proposed in Ridgefield?

What is the basis on which you think there is need of yet another stop so close?

The next concern.  For the sake of further discussion, let’s say you pull the rabbit out of the hat and demonstrate the need for a fifth station. OK, that brings us to the location for this fifth station in Ridgefield.

The “Town” of Ridgefield is, well, where McHenry County College is located.

McHenry County College is one of the biggest assets in this area.  It is among the area’s largest employers.  It brings 100’s of students, staff and faculty to this area daily.  Virtually all come and go via their cars. Now, if there was the option of going to and from by train, the college would benefit from this easier access.

Hum, let’s think about that one.  Fewer cars on the road, less gas consumed, more riders for Metra… wait a minute, could this be planning for growth that actually benefits the community? All right, again for the sake of further discussion let’s analyze further the placement of the train station in Ridgefield. If a station is built close to the college, access to it is a short walk. Is there a site on the south side of the tracks that will work?  I’m sure one has been considered, right?

Now we come to the cost of this station.

We all know about the proposed site on the north side of the tracks. Land costs, road access costs, road expansion costs, perhaps eminent domain costs, etc., and the impact on the immediate area have been studied.

There have been estimated costs on the north side site.

Have there been any on a south side location?

The same costs of course, will apply, no doubt.

The land costs may be different. The yellow circle is the land Metra examined closely that is owned by Craig Steagall and his partner. The red circled land is that owned by Ken Koehler and the estate of his partner. The image appeared in an ad purchased by Steagall.

The road improvement costs probably would be different.

Impact on the area would require much less displacement. The Union Pacific train tracks are right across from the property recently purchased by McHenry County College. A full view of the new land can be seen above. Toward Crystal Lake around a small parcel MCC also abuts Ridgefield Road.

How would these costs compare?

North side vs. South side.

Would it be prudent to make a comparison?

Nah, that makes too much sense!

The decision makers must be right.

We’ll just do it their way….Hum, who are these decision makers anyhow?

Maybe we should look into their logic.

Who are, exactly, the powers that be in this case?

Is it too much to assume that whoever the powers are, their intentions are for the overall good of the local community.

Logic, common sense, and a total analysis of all possibilities must have been considered in their choosing the proposed site. Those things certainly were considered here, of course.

That is the duty of elected officials, right?

….Hum, as a stretch, could there be something else, some other reason for the proposed site to be where it is?

If we were to ask someone, say Sherlock Holmes, to find perhaps, another reason for this site, where would he begin?

He might first make inquiries along the line of who is to benefit from this site.

Let’s begin with who owns it.  Who will make the first dollars here? Further investigation into public record reveals that the Chairman of the McHenry County Board owns the property, and stands to make a sizable amount of money if this site is confirmed.

Besides Mr. Koehler, is there anyone else in his circle who would also benefit? Could there be a present or former member of the Metra Board with like financial interest?

To view it from this perspective, ya can’t help but raise an eyebrow. Will a Sherlock Holmes reveal more that might be, well… common?

Nah can’t be.  This is, after all, Illinois.

Having the authority to authorize the disbursement of government funds is an enormous responsibility.

Extreme prudence should be used in doing so.

This station is simply not needed.

We all know of the famous “Bridge to No-Where.”  What we will have here is the “No Need Station!”

My name is Jim Roden. I live in Crystal Lake and own a business in Ridgefield.

I would very much like to arrange a time to meet with you and discuss these issues. 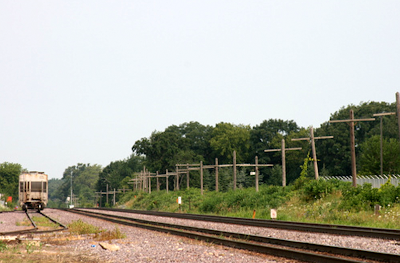 A view of the site on the South side of the tracks that Metra has selected.