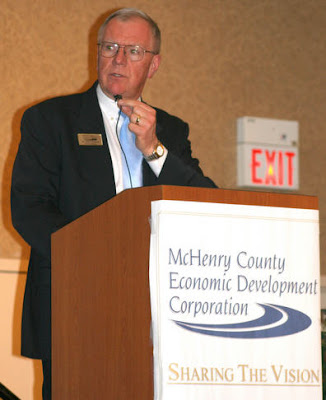 That’s probably because Packard also is chairman of the EDC’s board of directors.

He could hardly have missed my being there, because, as usual, I was snapping his picture periodically.

Before the dinner started on March 6th, Trustees Donna Kurtz and Frances Glosson had expressed their personal apologies for my and three others being kicked out of McHenry County College the Thursday before last, February 28th.

We were waiting in the hall for the meeting to conclude. 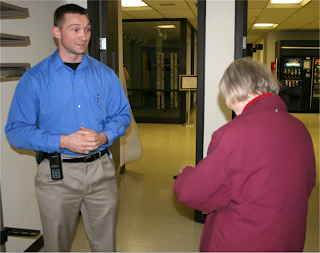 Friday, March 7th–seven and a half days after the expulsion–I received a written apology from Packard

Dated, Tuesday, March 4th, and postmarked Wednesday, March 5th, the letter (some paragraphs have been added to make it easier to read) says,

“I was notified that on Thursday, February 28, 2008, you were asked to leave the building prior to the adjournment of the Board meeting.

“On behalf of McHenry County College and the Board of Trustees, I apologize for limiting your ability to attend the conclusion of the public portion of the Board meeting that evening.

I would like to assure you that the only action taken by the Board following the Closed Session was the adjournment of the meeting.

“It has been the standard practice of our Safety and Security Department to secure the buildings on campus after 10:00 p.m. Furthermore, with the heightened awareness of the importance of security resulting from the recent tragedy at Northern Illinois University, our campus safety officers have been even more vigilant in securing our facilities and adhering to all standard security procedures in place.

“Nevertheless, you should have been allowed to remain in the building for the conclusion of our Regular Board Meeting. Once again, I apologize for any inconvenience this may have caused, and I assure you this incident will not be repeated.” 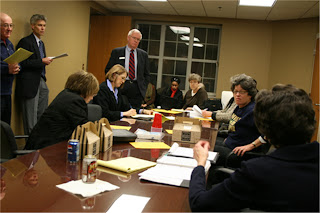 On the night March 4th, the college board and Packard and I were in Crystal Lake City Hall. After the college board had voted to purchase the newly re-zoned 57 acres between the campus and Ridgefield Road, I congratulated him on his strong presentation to the board about why the college should expand at its current location. I shook his hand.

The letter arrived over a week after the “incident.”

The day after the incident I and Jane Collins filed Open Meetings Act complains with the McHenry County State’s Attorney and the Illinois Attorney General.

On Saturday, March 1st, two days after the incident, the Northwest Herald ran an article.

I was delivered a message from Packard while he was behind closed doors. I can only assume that he was in telephone contact with one of the security officers.

What should I make of this written apology?