After almost 24 years in office, Chicago’s State Rep. Mary Flowers still has passion for her job.

I got there after State Rep. Mike Tryon testified, but still got a lot of the content, some of which will be laid out here.

“We come up with these catch plans like ‘All Kids.’ Can’t we at least try it?” she asked about her proposal.

Nick Skala, who was the one called upon to explain the details of the bill, explained that the cost would be an additional “2% personal income tax,’ plus “a 7% payroll tax.”

Since the personal income tax is now 3% (up from 2½% before the time of Jim Thompson and Jim Edgar, who both signed bills to raise the rate to 3%), a two percentage point increase would in reality be a 67% hike in the individual income tax rate and the amount people would pay.

Flowers heard the testimony of people from within and without McHenry County. 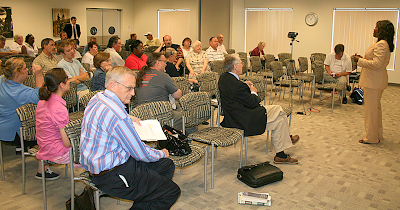 Then, she gave her experience of accompanying her brother to the doctor.

But, first she told how she learned she was to chair the committee. House Speaker Mike Madigan called to inform her. She told him she didn’t know anything about health care.

“’Well, Mr. Flowers, it looks like you’ve lived a pretty good life. We could operate and you’d walk around all your life with a bag.

“You can’t do this!” Flowers asserted. “Who do you think you are?

“I can’t tell what else I told him, but he’s no longer practicing in this state.

“I swore my presence would be felt.”

If that hasn’t provided passion for her mission, I can’t imagine what has.

“I’ve seen people lying on gurneys,” she continued, pointing out they weren’t just black people, but people (I think she said) “like us.”

“They were not waiting for the doctor. They were waiting to get permission from the insurance company (to receive medical care).

“Who am I to say which one of you should live or die?

“If you don’t like (the way local politicians are representing you), I’d suggest you vote the bums out.”

There was more, of course, but it’s past midnight and I’ve had a long day.