A roomful of Northern Illinois Pro-Lifers met at Mama Rini’s Restaurant Saturday for breakfast to hear Illinois Citizens for Life lobbyist Ralph Rivera explain what happened during the election and what how the group’s cause could be advanced.

“We have very hostile administrations in Washington and Springfield. We need to organize like in the early days. We need to dig in,”

As to the situation in Springfield, Rivera said,

“In the Illinois Senate, there was a wash. State Senator Bill Peterson was replaced by Dan Duffy. He’s not as good as (State Senator Bill) Peterson, but on the bills in Springfield, he’ll be OK.”

“In the House we gained a…seat…(Democrat) Kurt Granburg’s replacement (Republican John Cavaletto) is pro-life (while the retiring incumbent wasn’t).

Rivera told of the loss of Aaron Shock’s pro-life vote when he moved to Congress, in Naperville Darlene Senger is pro-life, pro-family (while current incumbent Joe Dunn wasn’t a solid vote).

Except for the new Senate leaders.

Rivera pointed out that new Senate President John Cullerton is “very smart. He’s more dangerous in my opinion than Jones was.

With regard to Senate Republicans, Rivera reported that of the 22, only one is pro-choice.

She is Christine Radogno, the newly-elected Senate GOP Leader.

“She got both of our senators,” McHenry County Right to Life godmother Irene Napier observed.

When someone asked how she knew, Rivera explained that the vote

“is secret, but it’s not secret, secret.” 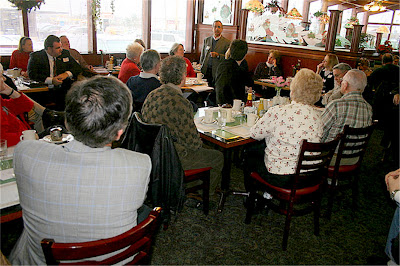 The vote of one, former GOP gubernatorial aspirant Bill Brady of Bloomington, elicited this comment:

Rivera explained that Radogno’s challenger in the leadership fight, Dillard,

“did a commercial saying nice things about Obama,”

which hurt him in the contest. Dillard is pro-life.

= = = = =
In the top photo Bonnie Quirke of Libertyville can be seen asking a question. Crystal Lake Paul Weyna is standing in the background.

Below is a head shot of Ralph Rivera. A smiling Irene Napier is below right.

Finally, there is a shot of part of the crowd.