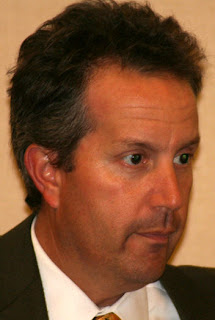 I was wondering why Crystal Lake Mayor Aaron Shepley didn’t run for re-election as secretary of the McHenry County Republican Central Committee.

He has been appointed a “vice chairman of community outreach” by Bill LeFew successor Mike Tryon.

If Tryon wanted the local Republican Party to represent what Aaron Shepley stands for, fine.

Shepley stands for approval of a minor league baseball stadium, which even the McHenry County Board voted unanimously to kill.

Shepley is probably the biggest tax hiker in McHenry County this year. He led his city council to increase its city sales tax by 75%. (No, you did not misread that figure. It was one percentage point. After July 1st, it will be one and three-quarters of a percentage point.)

And, we can’t forget how Bill Cellini, the Republican developer mentioned so often in the Tony Rezko corruption trial, appeared before the city council and was selected to develop Vulcan Lakes right before his name appeared in Rezko’s indictment. (Neither Cellini nor Shepley have been charged with any wrong doing.)

And here’s video that puts the short version into context:

And, that reminds me.

But telling citizens that one is not going to use condemnation a couple of months after eminent domain suits have been filed by your city attorney raises even more questions about how effective a “community outreach” guy Shepley can be.

If that’s the image that newly elected GOP Chairman Tryon wants to project to the “community,” I wouldn’t be surprised if local Democrats are smart enough to take notice and do something about it.

Shepley is trying to reach out into us taxpayers’ wallets.