Last Saturday morning Mike Fraser, who runs Mike’s Service Center next to where Walmart used to be, provided all sorts of helpful hints on car care.

He was speaking to the United Methodist Men of Crystal Lake.

Fraser is a guy who prefers maintenance to repair of cars.

While I was commuting to Springfield, I know he saved me from at least one accident with his expert diagnostic talent.

When you select a car repair guy, most people probably find anecdotal recommendations.

I was surprised to learn there is actually one solid measuring device, at least for cars who fail the emission test administered down the street from Mike’s place of business. “We’re graded on that,” Fraser revealed.

That certainly got my attention, although my 1995 Cadillac has apparently been grandfathered in and never has to be tested again.

Fraser personally takes the cars he and his men fix over to the testing place.

“We’ve tried real hard to serve our community and God. The business was a gift from God,” Fraser started.

It wasn’t until after his presentation on the necessity of changing one’s oil every 3,000 miles or three months that an astounding accomplishment came out. 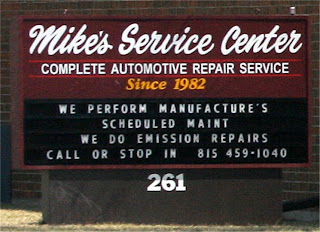 Fraser has arranged for over 500 cars to be donated to Willow Creek’s car ministry, which is run by the chief pastor’s brother, Don Hybels. Run out of Elgin now, the Willow Creek is so organized that it has developed a “how to start a car ministry” kit.

The Crystal Lake Evangelical Free Church has one, as does the Cornerstone United Methodist Church I Plato Center.

Fraser pointed out that those needing a car also need to be able to maintain and insure it. Just giving a car to a person in need is not enough to ensure a good experience for the person.

“When I send them over, I tell them exactly what’s needed,” Fraser said.

He explained that Willow Creek repair, resell of send them to auction, using the proceeds of those sold for its car ministry.

But, let me jump back to the advice part of the talk.

Discussing synthetic oil, Fraser cautioned that, even with the new cleaning agents, the oil filters needed to be changed every 3,000 miles and the oil needed to be kept full.

“People tend not to even check the oil,” he observed.

He wasn’t talking directly to me. It just seemed that way.

“When oils get older they tend to break down and dissipate.

“If you can’t read the sticker, it’s probably time to change it.”

Fraser also stressed that tire pressure should be kept up to the high end of the manufacturer’s recommendation.

“If you don’t rotate the tires, they won’t wear evenly,” he added.

Concerning batteries running down because of leaving car or trunk lids open, he recommended “battery packs now at Farm and Fleet (in Woodstock).

“They will literally start your car. I know because my (relation concealed to minimize the embarrassment) has called me at least twice and it’s always after (his wife) has left.”

He cautioned about jumping batteries incorrectly, but the talk got diverted before he could explain the right way.

Do it wrong and you can ruin the main processor that costs $400.

“You can burn up an alternator pretty quick, (too),” Fraser said.

Mike forgot to tell the guys how to jump a car, but, as luck would have it, he gave a firsthand demonstration to my wife, who found out that her Toyota does not turn off the lights when she shuts the passenger side the way it does with the driver’s door.

Jumping her car after church Sunday, Mike told my wife to

Now that it’s spring, the expert advised that people drive with the windows open and radio off to see if they can hear any sounds they don’t think should be there.

That reminded me of when I heard such a sound and drove the car over.

Mike turned the engine off and the sound continued.

Somehow my electric razor got turned on and was making the sound.

He suggested spraying the car hinges and locks with WD-40.

“It keeps it lubricated, keeps the moisture out.”

No graphic in the locks, though. It clogs them up.

“We try to do it when we do oil changes, but the quick ones don’t have the time,” he said.

In addition to Fraser, Hank Whitley, who lives in Covered Bridge Trials and moved here about the turn of the century, share some of his background.

Whitley got a general contractor’s license in North Carolina and, while officially retired, he can’t seem to pass up opportunities to fix people’s homes. He’s now working with UMM President Jim Nelson to renovate the family’s kitchen.