The location is not as good as the old Pauly Toyota showroom on Route 14, but McHenry County Republicans discovered, just as my father did, that the price was right. 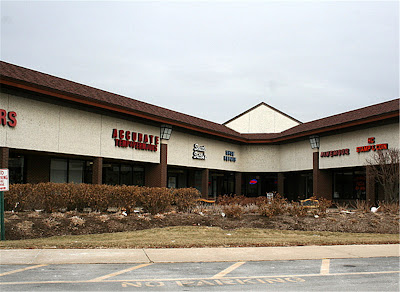 It was like old home week as I walked around the place my father used for the Barley and Malt Institute, a very small trade association for which he was general manager. Some doors have been moved, but it’s basically felt like home.

Look closely and you can see a neon “OPEN” sign in the window in the “V” behind which my father had his desk. (Click to enlarge any image.)

The last time I was there it was a print shop, somehow appropriate because my father kept two offset presses in the back room to print his “Star Reporter” and various business documents and campaign pieces. 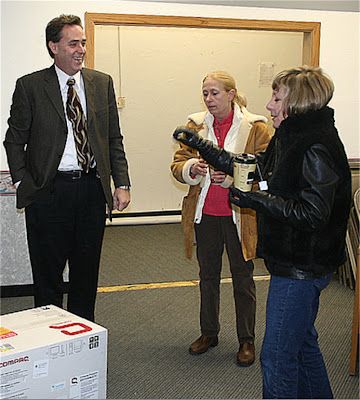 You can see, from left to right, Linda Moore, a Republican candidate for Grafton Township Supervisor, helping Maria Graham and Mary Alger unpacking one. 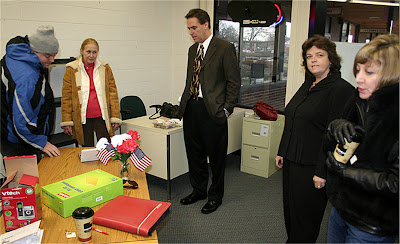 A Young Republican, Derek Graham, who runs D and M Computers, Inc., out of Woodstock (815-206-5579) is seen explaining something technical to Tryon and Central Committee Vice Chairwoman Kathleen Kutcha, a McHenry Township Trustee running for re-election, above. Moore and Alger are seen on the right hand side of the photo.

The new headquarters will be open from 11-5 on Tuesdays and Thursdays and 10-2 on Saturdays.

So far there is no signage, so Tryon is looking for someone to “sponsor” the project, which will cost about $800. Then local Republicans will have a sign right on Route 14 again.

I also notice (and you can see in the top photo) an excellent spot for a sign on the marque in front of the GOP office.

If you see those letters on any store that has gone out of business, let me know and maybe we can get them for free.